Last month, the Government of Ontario held a Talent and Skills Summit (OTSS) that many education sector stakeholders, including OUSA, attended. The same week as the summit, McGill University President Suzanne Fortier suggested at the World Economic Forum in Davos, Switzerland that universities need to prepare students for the modern labour market, while American Vice President Joe Biden indicated that investing in education was one of the keys to saving the middle class.

The sentiments expressed at these events echo what academics, policymakers, and students have been suggesting for years: that the relationship between higher education and the labour market is undergoing significant changes that affect employers, universities, and students. Acknowledging this change is the first step towards addressing what needs to be done going forward.

According to a report from the Council of Ontario Universities, it is estimated that by 2022, 71 percent of all new jobs will require postsecondary education or management. If one accepts the premise of the knowledge economy (that we are moving away from traditional inputs like land and towards intellectual capital inputs like high-technology innovation), then that estimate seems intuitive. Students certainly seem to agree—there are more enrolled in universities now than ever before; and if students are following economic trends, government needs to do the same.

In order to facilitate the success of the future workforce, the Government of Ontario should do the following:

Improve productivity: Since the early 2000s, labour productivity in Ontario has flat lined; meanwhile, overall hours worked has risen (see graph below). There are many broad factors at play in labour productivity, including innovation, trade, and management strategies; but what can be most immediately addressed in Ontario is the skills mismatch issue, which has simultaneously created labour shortages for certain sectors of the economy, such as agriculture, and high unemployment rates for specific segments of the workforce, such as youth. The most immediate action government can take to remedy this is to continue its push for more international students and make it easier for them to settle in Ontario post-graduation. They can also encourage universities to properly articulate the learning outcomes and skills students derive from their courses, so students can then effectively communicate these skills to employers and boost their chances of being hired. 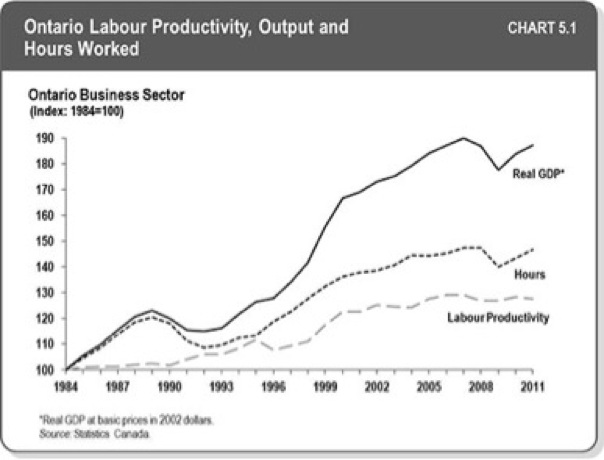 Manage expectations—everyone’s: Students should be able to anticipate what they’re getting out of their education and what their potential career paths may be, and employers should have more realistic expectations for graduates. For those who are able to gain relevant work experience during school this is less of an issue, but for those who cannot, expectations should be adjusted accordingly. A highly skilled workforce is one that encourages willingness to provide more on-the-job training for entry-level employees who may lack work experience, but demonstrate potential, skill, and enthusiasm. The government can aid employers in this undertaking by providing incentives for them to provide training and hire recent graduates.

Encourage innovation—in the workplace: A highly skilled workforce should leverage the skills of all segments of its population, including that of students, women, indigenous peoples, and immigrants. Government programs must continue to target groups that are underrepresented in the workforce in order to realize their potential and their economic contributions to the province. Moreover, a highly skilled workforce should also endeavour to bridge wage gaps between men and women so as to encourage more participation from women in knowledge-based occupations and executive positions—including at the student level. Funding for technology research and adequate national savings are undoubtedly major drivers of innovation—but so too is diversity and by extension, creativity—both of which will come from encouraging workforce participation from marginalized groups.

Support and facilitate adaptability: Even the best economic policies can only go so far. At some point, market events can be overpowering to even the most robust, evidence-based programs and initiatives. A highly skilled workforce is one that can adapt to global trends and is able to transition to other sectors of the economy when employment in their field is negatively affected by global forces beyond their control.  The impact of low oil prices on Alberta’s Fort McMurray is the most recent example of such events. Displaced workers, including many students, need support and possible retraining for other occupations when they are faced with no other choice. Finally, universities also have an essential role to play in improving adaptability by providing students with well-rounded skill sets that make them capable of transitioning between several job types at different points in their lives.