Provincial OSAP Clawbacks Explained: Students deserve the funding they were promised by the federal government

TL;DR? Ontario students are not receiving more OSAP, even though the federal government is spending more to support students during the pandemic. The provincial government is clawing back the provincial portion of OSAP, which means students aren’t feeling the full benefits of the federal government's investments into financial aid. The province is using these clawbacks as a cost-savings mechanism instead of continuing normal levels of OSAP spending to support students.

The Ontario Student Assistance Program (OSAP) is one of Ontario’s most well-recognized policies and an incredibly powerful financial aid tool to help students access post-secondary in Ontario. While there have been many positive and not-so-positive changes to OSAP over the years, I only want to talk about one very specific issue right now: provincial OSAP clawbacks.

Unfortunately, not many students and post-secondary stakeholders are talking about this issue. This could be due a multitude of reasons but here are some of my guesses:

There wasn’t a net increase in OSAP, but rather, a change in federal/provincial funding contributions, as depicted in the graphic below. 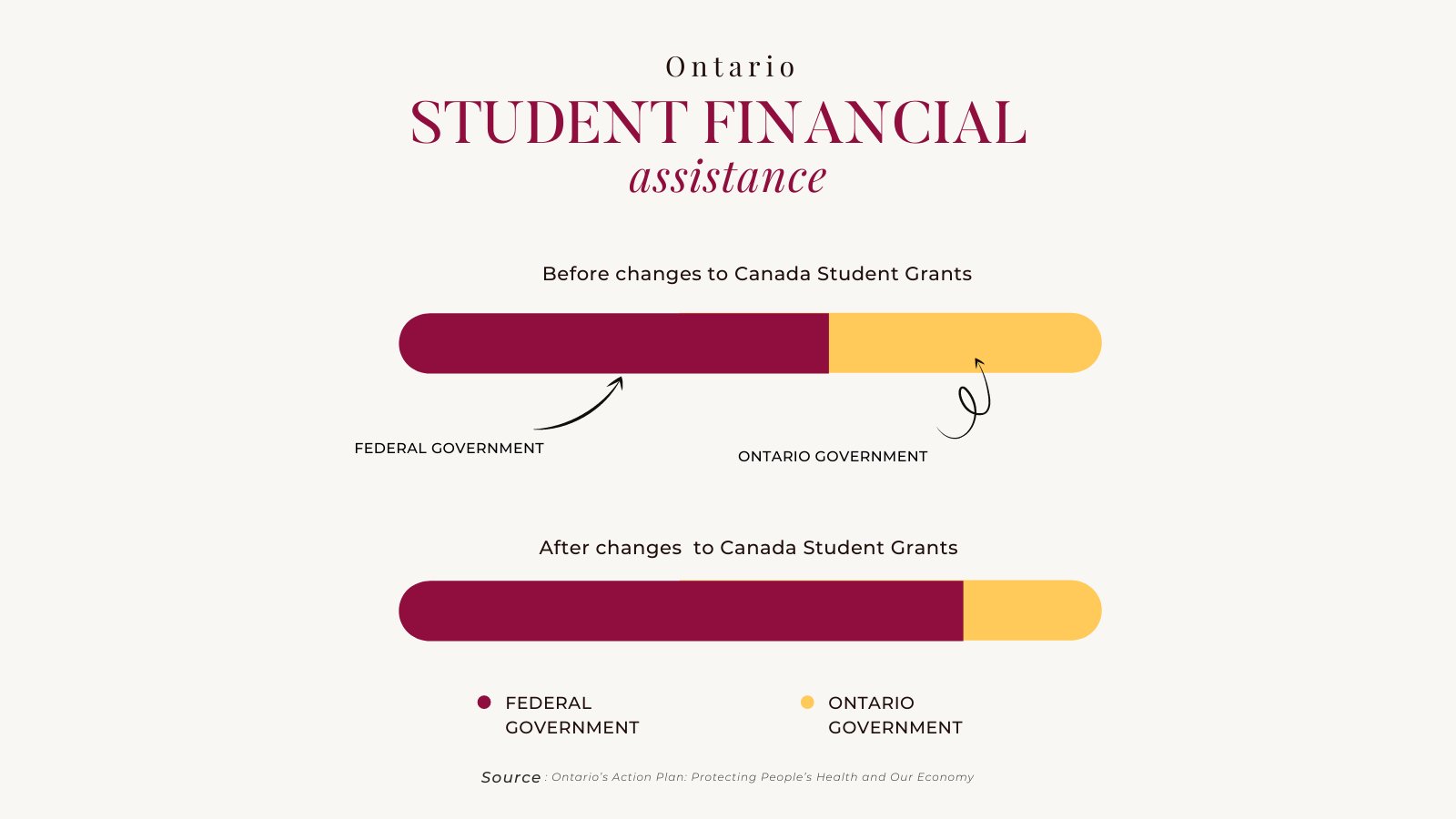 How do we know that the provincial government is clawing back OSAP?

In Ontario’s Fiscal Plan and Outlook (page 194, March 2021), there is a $400M reduction in OSAP expenditure in 2020-2021 compared to the previous fiscal year. Given high levels of unemployment due to the pandemic, we would have expected OSAP-need to increase and therefore, OSAP expenditure to increase, NOT decrease. This can be attributed to the federal government contributing more to the OSAP calculation, which resulted in the province choosing to contribute less funding to OSAP. 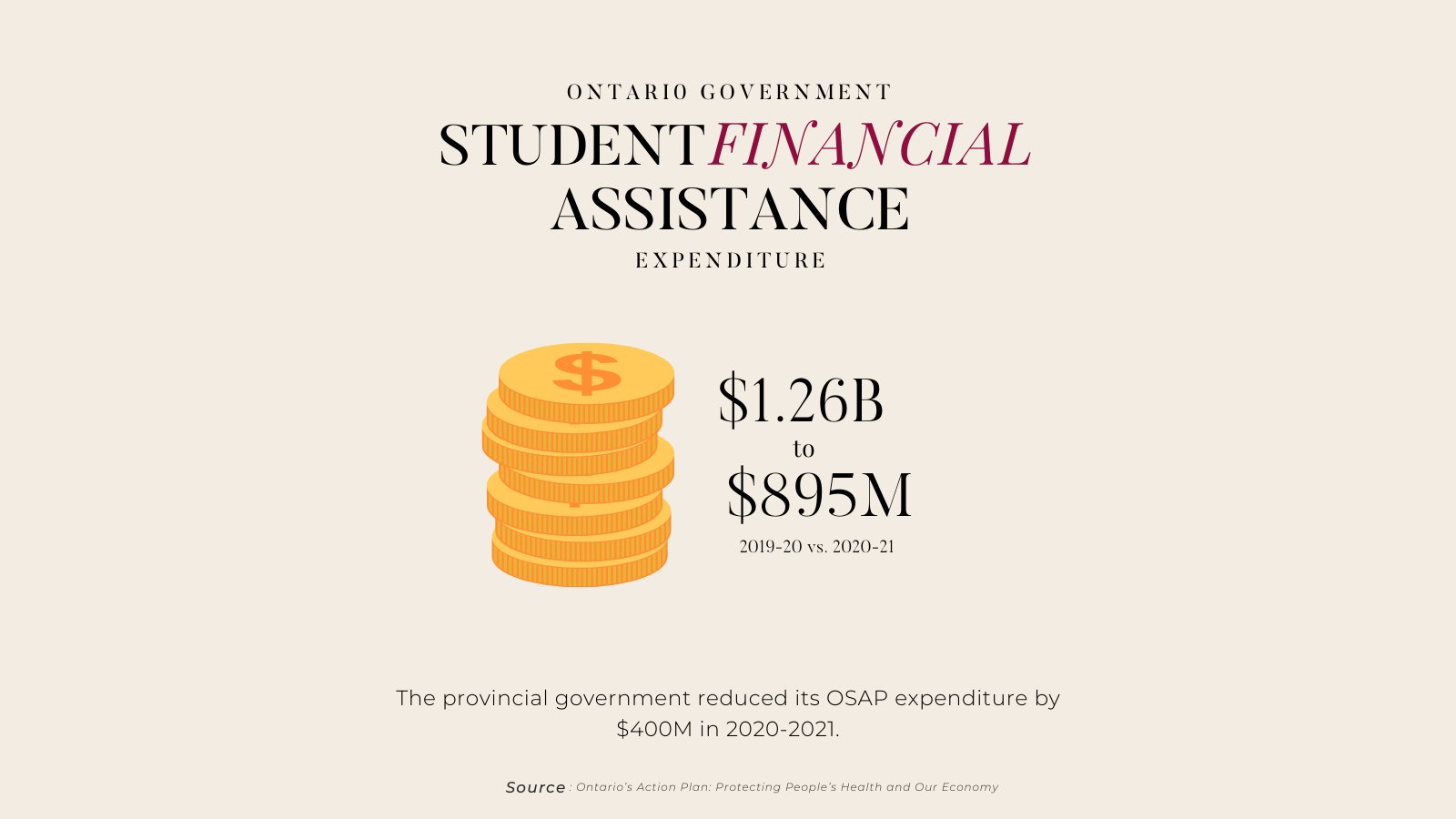 Why does this matter?

With limited summer and part-time employment opportunities, students continue to struggle to afford post-secondary education. These federal investments were meant to help students, but instead, they are being absorbed by the Ontario government as a cost-savings mechanism.

We also know that the federal government has committed to doubling CSG for 2021-2022 and 2022-2023, meaning that if Ontario does not stop these OSAP clawbacks and continues to absorb $400M/year, they may retain upwards of $1.2B that should have gone to OSAP. According to FAO’s recent report, there continues to be a reduction of OSAP expenditure in the first quarter of 2021-2022 indicating that these OSAP clawbacks are still occurring. 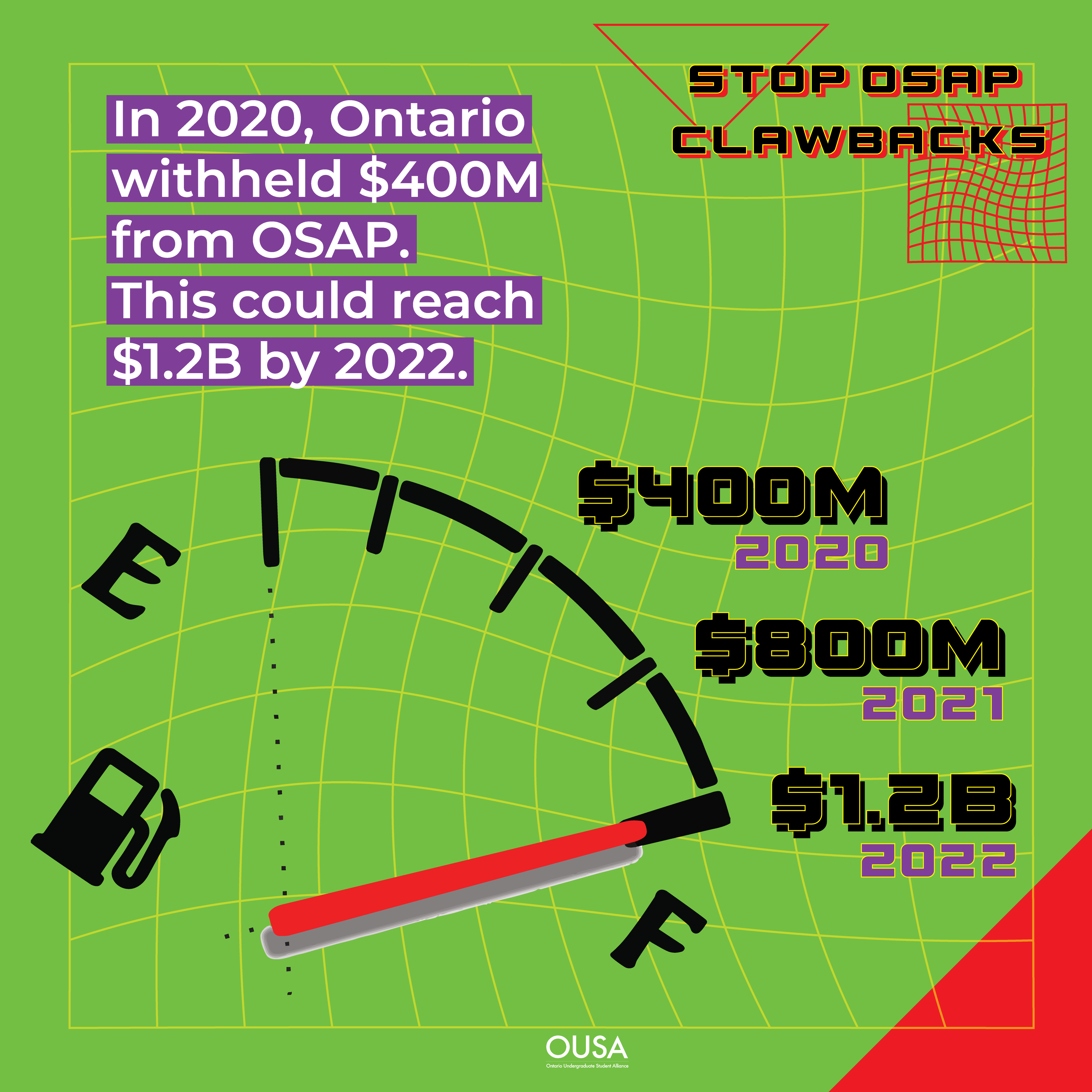 What OUSA is asking for

Simply, we want the provincial government to stop these OSAP clawbacks and re-invest any savings back into OSAP to provide financial support directly to students.

OUSA has several recommendations on how to improve and enhance the student financial aid system. However, our ask right now requires no additional funding when compared to OSAP expenditures in 2019-2020. We are simply asking that students receive the funding they were promised by the federal government.

Take action: write to your MPP to ask that they stop these clawbacks and complete our brief response form to share how COVID-19 is affecting your access to education.